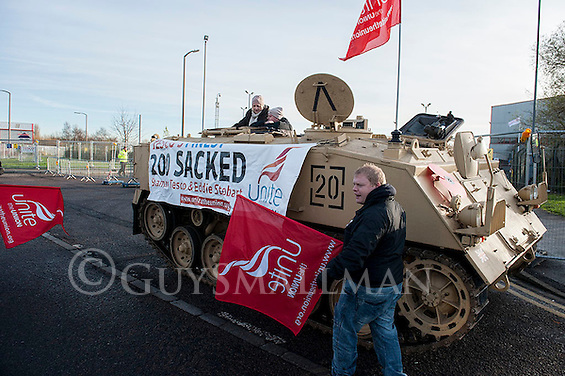 A dispute between members of the UNITE Trade Union and haulage giant Eddie Stobart has now become and indefinite strike to protect jobs, pay and conditions. The row which began in September when Eddie Stobart took over the running of the main northern supply depot for Tesco supermarkets.

There has been 5 days of strike action already. Now 183 drivers have started continuous action since Thursday December 6th.

On Saturday (Dec 8th) several hundred drivers and their supporters gathered at the main entrance to the depot blocking it with an armoured personell carrier. They then marched into the centre of Doncaster and held a mass picket of the main Tesco store. Veterans Lorries attempting to deliver to the shop were detained by pickets until the police intervened. Meanwhile more strikers leafletted every entrance to the store appealing for local people to boycott it until the dispute is resolved to the drivers satisfaction.

Film length: 9:13 Around 200 British Airways cabin crew descended on Parliament for a meeting with MPs during their third strike over poverty pay. Shocked MPs called their £12K basic salary and horrendous conditions “a […]

“BBC! ITV! Where are you?” BA strikers visit the media

24th February 2017 reelnews Transport, Workplace Struggles Comments Off on “BBC! ITV! Where are you?” BA strikers visit the media

Film length: 2:50 Fed up with the lack of coverage of their strike by the mainstream media, striking BA Mixed Fleet cabin crew protest at the BBC and ITV studios – finishing off at ACAS, […]