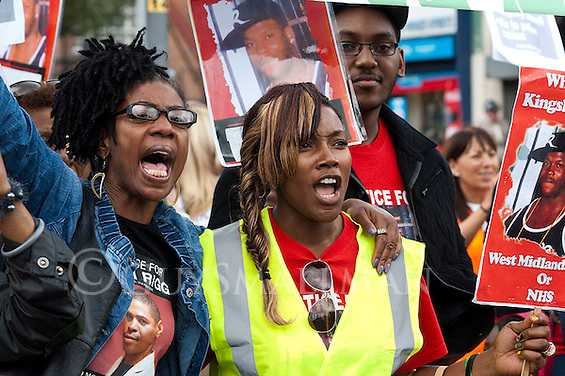 On Saturday (Aug 18th) hundreds of people marched through Birmingham to support the ongoing campaign for Justice for Kingsley Burrell. The protest stopped at the spot where Kingsley was detained over a year ago. The Police have only just released his body to his family. A delay that has inflamed their anger.

The demonstration was led by a deafening reggae sound system playing protest songs from across the decades. It marched at a slow pace stopping at regular intervals with at least one sit down protest as it came into Birmingham town centre. Coaches came from all across the country to bring people to the event. Part of the Manchester contingent included the family of Anthony Grainger and their supporters.

Then the following Wednesday the annual commemoration for Sean Rigg took place in Brixton on the fourth anniversary of his death in the local police station. A packed out town hall heard from his loved ones. Marcia and Samantha told how their lives had been shattered and the journey their family had taken over the past four years. Speakers from Defend the Right to protest, UAF, the Newham Monitoring Project and the RMT also spoke from the platform followed by a Q&A from the audience. The issues are particularly fresh in the minds of local people following a recent incident just yards from where the meeting took place.

On Sunday August 19th a man was rendered unconscious following Police action outside the Ritzy Cinema. It is alleged that arresting officers stamped on the mans head. The aftermath was captured on the mobile phone of a passerby.

There was also a screening of ‘Who Polices the Police?’ a film that scrutinises the role of the Independent Police Complaints Commission through the experiences of the Rigg Family. Migrant Media who made the film (and also Injustice) are keen to hear from anyone who would like to screen it following its recent release.

After the rally an angry march led by the Rigg family went to Brixton Police station. After listening to speeches at Sean’s memorial tree a few dozen people including Marcia and Samantha stormed into the lobby of the station and occupied it for a short time.

#AxeDrax! Outrage at dangerous increase in burning wood for energy

Film length: 8:10 Protestors from a variety of campaigns gathered outside Drax’s AGM as it was revealed that Drax intend to burn 100% wood at the power station in Yorkshire – 98% of which will […]

Film length: 7:42 Two actions from Disabled People Against Cuts’ week of action: first at the Department of Transport with the RMT, where they are kept waiting in trying to hand over a petition to […]

Running Time: 6min 33secs Healthworkers marched from St. Thomas’s and UCH hospitals this week to Downing St, to tell Boris Johnson exactly what they think of his insult of a pay offer. 3% doesn’t even […]