On Saturday (July 26th) the English Volunteer Force (EVF) and South East Alliance (SEA) promised to bring “thousands” of nationalists (ie racists) onto the streets of South London for a “peoples march against terrorism”. The ‘terrorists’ presumably not including the Loyalist murderers, bombers and gangsters whose banners they like waving on protests? It became clear that a slanging match was happening with the EDL leadership when the organisers were forced to release a cringe-worthy video prior to the event.

In the end the planned 9 mile march from Woolwich to “west minster” did not happen. A group of no more than 40 assorted racists & fascists protested outside Lunar House in Croydon against immigration. The building has been the focus of BNP protests in the past. So it was unsurprising to see plenty of familiar faces there. The EVF were the biggest group who seem to be little more than a front for what is left of the National Front (NF). The NF saw a recent influx of disillusioned BNP activists who jumped ship to their miniscule party after deciding that BNP leader Nick Griffin was too liberal for their liking. Despite this, it is still a tiny organisation with few members and resources.

A massive (and no doubt expensive) police operation was deployed to protect the EVF from over 200 anti fascists who came from a broad range of groups including the PCS (whose members work at Lunar House), Unite Against Fascism and the By Anti Fascist network. The racists went through their usual ritual of acting tough while being guarded by hoards of throwback jerseys cops. Meanwhile the police demonstrated their well documented impartiality by harassing and detaining the anti fascists wherever possible. Earlier in the day some local hooligans attacked members of the press near the protest. They were grabbed by the cops as they tried to run from the scene but the police then released all but one of them to join the EVF protest. Ignoring complaints from the assembled press whom had been assaulted. Would such leniency be applied to the left?

Despite being assisted considerably by the state, the fascists seemed to have a pretty miserable time of it. It was clear that the organisers were visibly shaken by the low turnout and that many in their midst were uncomfortable in each others presence given decades of splits and acrimony in the far right. One individual with a strong Israeli accent invited pretty much every photographer present to snap his t-shirt of the extreme Zionist ‘Jewish Defence league‘. Seasoned anti fascists were highly amused to see him being photographed standing next to well known holocaust denier (and former BNP deputy leader) Richard Edmonds. We can only assume that they did not get round to chatting about thorny issues like the works of David Irving? 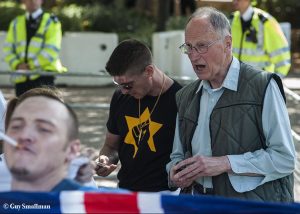 After less than an hour of being shouted down by anti fascists from all sides. The EVF & SEA left under heavy police protection and were escorted to Woolwich where they promptly cancelled their march and took the train to Westminster for a tedious rally outside Parliament. There they were again harangued by anti fascists while being heavily protected by the police. Not a good day for the master race…