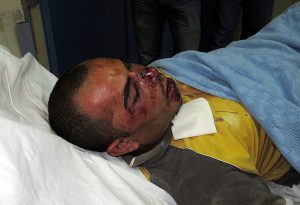 Journalists across Europe were shocked when The Hellenic Broadcasting Corporation in Greece (their national media service) was closed by the government at a few hours notice. Since the shock closure, staff at the station have gone into occupation and continued to broadcast online.

REEL NEWS is pleased to announce that they will show our documentary Into The Fire at 8pm on Friday July 19th. We are pleased for this opportunity to support the workers at the station and their struggle to save their jobs and this important national institution. We are also pleased at this opportunity to shine a light of the plight of refugees and migrants in Greece and to infuriate the Greek government, Golden Dawn and the Greek Police.

DAY ONE Today Reel News stopped in Victoria sq, Athens to speak some of the hundreds of Afghan refugees camped there on their way to Western Europe. Most were physically and mentally exhausted having been […]

Film length: 7:06 Since the late 90s refugees have been in Calais hoping to reach safety and stability in the UK. Many have relatives across the channel and the port which sees hundreds of lorries […]

Refugee crisis. A dispatch from Deutschland.

On a recent trip to Hamburg in northern Germany REEL NEWS witnessed first hand the brilliant response from ordinary German people and activists to the unfolding European refugee crisis. In the main rail station activists […]